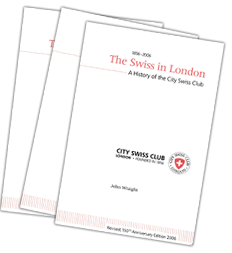 The unimaginable touch of time has endowed the City Swiss Club with a history of which it can be proud. With no permanent club house or staff it has achieved a remarkable record of continuity. It has developed a fine tradition which has been passed down from president to president, from committee to committee. For over a century and a half, the Club has played a key role in the affairs of the Swiss community, helping to keep the colony together in times of stress. A member of the Club founded the Swiss Benevolent Society, another The Swiss Oberserver. Others were active in the founding of the Swiss Mercantile Society, the New Helvetic Society, the Swiss Economic Council and the Federation of Swiss Societies in the UK. Others have presided over the Consistoire of the Swiss Church.

The book can be purchsed
Please do email Walter Isler if you are interested. 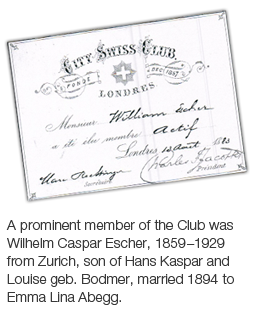 From its beginning, the City Swiss Club became the embodiment of the Swiss presence in the capital. Its members were the inheritors of the long City Swiss tradition which can be traced back at least five hundred years. This passes through a distinguished line of bankers and merchants, priests, doctors, architects and engineers, to the early trader, Georg Gysi of Basel, whose portrait Holbein painted. 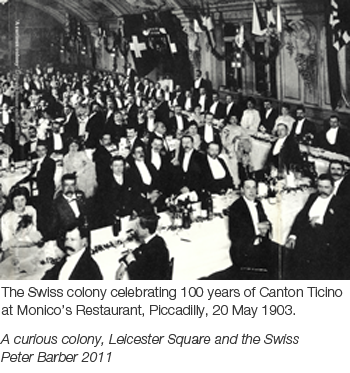 In its activities the Club has had the generous support not only of its individual members but also of many Swiss companies in the UK who have provided officers for its committee, have helped with secretarial assistance and have made donations towards its charitable objects. And, from its first meeting, it has enjoyed the continuous support of the Swiss Embassy in London, and of the Legation and the Consulate-General before it. During the dangerous days of the Blitz on the City in the 1940s, almost the whole of the diplomatic staff of the Legation turned out to attend the Club’s meetings. 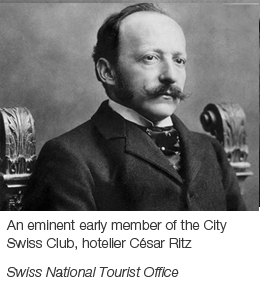 Since 1856, the Club has gone through many vicissitudes. It has experienced halcyon days of peace and prosperity and the catastrophe of war, the worries and distress of the years of depression, the stimulation of the years of recovery. It has lived through periods of great social an economical change. There have been times when the Club has flourished and times when it was in rather low water. 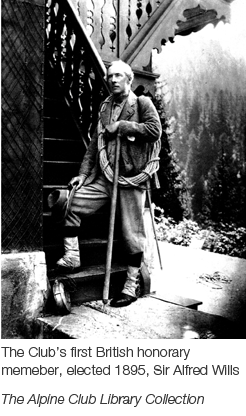 The City Swiss Club has a long and distinguished history, acting as an outpost of Switzerland in Britain and an important link between the Swiss colony and the British people. And over the years, the Club has made, and continues to make, its own special contribution to Anglo-Swiss relations.

Source:
1856-2006 The Swiss in London,
a History of the City Swiss Club by John Wraight 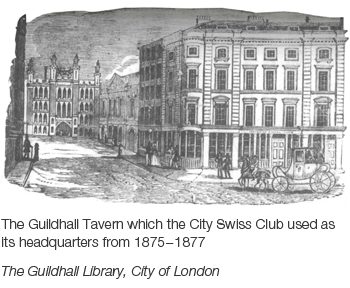 The Guildhall Tavern which the Club used from 1875 to 1877 had been opened about thirty years earlier. It was at 81 and 82 Gresham Street, on the corner of King Street and overlooked the Guildhall. It was known both for ist entertaining compang and ist rare vintages and beautiful table. It was used a good deal by Guildhall officials and in 1877 Sir John Bennett, who as Mr Sheriff Bennett had been the Club’s guest of honour at their banquet. 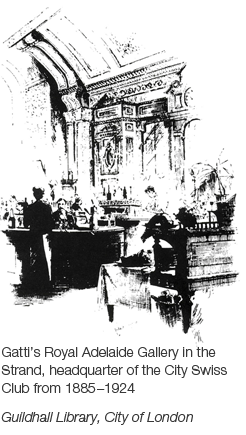 The Swiss Alpine Club’s London branch sharde for several years the City Swiss Club’s headquarters at Gatti’s restaurant – the Royal Adelaide Gallery in the Strand. Other organisations whose names appear in the Club’s guest lists of the time include the Unione Ticinese, The Union Helvetia, the Schweizerbund, the Swiss Mercantile Society, the Swiss Institute, the New Helvetic Society, The Swiss Observer, Swiss Choral Society, Swiss Gymnastic Society, the Swiss Rifle Association, and the Siwss Club Birmingham. One special guest was for some years the Swiss-born contralo Violette Browne, who regularly sang the British and Swiss national anthems accompanied by the full orchestra, while the whole company stood. 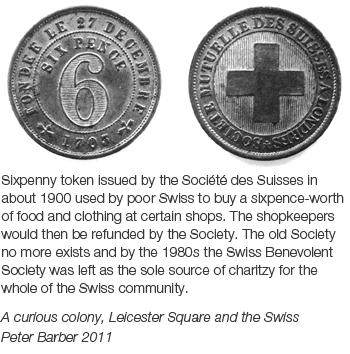 Another book about the history of the Swiss was published in 2011 by Peter Barber „A curious colony, Leicester Square and the Swiss“.

Contrary to what many people assume, the Swiss association with Leicester Square did not commence in the 1960 with the building of the Swiss Centre. Rather this was a manifestation of a relationship going back to the early eighteenth century and continuing today even after the demolition of the Swiss Center.

If you want to read this interesting book about the Swiss in Leicester square please contact the Swiss Embassy.